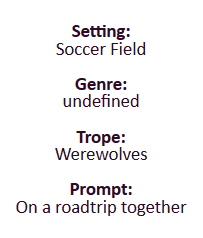 “Remind me why we thought it was a good idea to drive through the night?” Freya asked as she pulled herself up onto the wooden fence of the community football field. A little down the road, she could see her foster father, Ryan, struggle with the smoking car.

Margaret, her foster mother, sighed. “Ryan thought it would be easier to drive when the roads were quiet.”

“We’re only going to the Lake District.”

“I know, but he had a whole plan with calculations and everything.”

“His plan involved drinking energy drinks from the Chinese supermarket with a sheriff badge motif that said ‘devotion, courage, sacrifice’ on it. I wouldn’t exactly call that a solid plan.”

Freya pulled her leather jacket tighter around herself as she heard something that sounded suspiciously like a wolf howling. Which was quite ridiculous, given that they were within view of a Tesco.

Speaking of, Freya thought to herself, deciding that she was particularly cold.

“Want to wander around Tesco while we wait for rescue?” Freya asked. “I’m cold and they might have one of those coffee machines.”

Margaret gave a reluctant hum, clearly not wanting to leave her husband alone in the middle of the night.

“You go, if you’ve got your phone,” Margaret told her. “Get us all some coffee and snacks and I’ll pay you back.”

Freya nodded, about to do just that, when she heard the howl again. Her hair standing on end in response.

She moved towards the supermarket, away from her foster parents, before calling out to Amber.

“Okay, so, I know it’s probably not, but I am now assuming everything even slightly weird is supernatural.”

“What is it?” her guardian asked.

“I can hear howling.” As if in response, it happened again.

Amber sighed, before looking pointedly up at the sky.

Freya squinted, not really seeing anything. It was a little overcast, but not enough to obscure of bright light of the full moon-

Amber, once again, responded with just a look.

“Right, okay, shouldn’t be so surprised.”

There was another howl and Amber flinched. “It sounds like it’s in pain.”

“You spend a century around magical creatures and you tend to pick up a few things.”

Freya sighed. “I should go and see, shouldn’t I?”

“You could ignore it and leave them in pain.”

Freya glamoured herself to make sure her foster parents wouldn’t see her as she made her way around the side of the football field, trying to sense the Werewolf.

It didn’t take her long to find them, hiding just behind the trees. They were whimpering, as if in pain, though Freya could see no sign of a wound.

“There, on the neck,” Amber prompted, and Freya looked to see a small bite mark.

The large wolf nuzzled up close to her, seeming not even slightly threatening.

“If I had to hazard a guess? A Vampyre. Their bite is poisonous to Werewolves.”

“Do you have your hunting gear?”

Freya nodded, indicating to her handbag. She never left the house without it.

“What about that anti-venom poultice you made up?”

Freya pulled it out of the bag with an apologetic look at the wolf. She wasn’t exactly good when it came to potions and poultices. Amber had tried to teach her when her foster parents were out, but they barely worked and often had nasty side-effects.

“This is going to sting,” Freya said as she opened the Tupperware box. “Like, a lot.”

She scooped out a significant portion of the goop.

“Please don’t freak out and hurt me,” she pleaded, with no idea of how much the wolf understood.

It let out a pained squeal as she applied the poultice, but seemed to be doing their best to stay still.

“Yeah, I know, it’s not supposed to sting. But it’ll probably work,” she said as she brought out a pack of babywipes from her bag. Amber had shown her a spell to enlarge the inside and Freya had taken to hoarding everything.

Freya wiped her hands clean along with the outside of the Tupperware box, before putting the rest of the poultice away.

The wolf seemed to have perked up at that point.

“He seems recovered,” Amber noted. “It must be working.”

Amber gave one of her pointed looks.

Freya shook herself as the wolf let out a huff.

Freya turned back to her guardian. “And you can’t just assume someone’s a guy because they have a dick.”

Amber just blinked at her.

“You know ‘I died in the nineties’ only works as an excuse for so long.”

The wolf was back on their feet by that point, their breath slightly odd in a way that made Freya worry, but she eventually realised that they were laughing.

The wolf responded by licking her hand.

“Okay, okay, that’s enough,” Freya said quickly. She wasn’t good with sliminess, though she appreciated the gesture. “Can you get home or whatever?”

The wolf gave its best imitation of nodding before giving her one last lick and rushing off.

“Okay. Now I definitely need coffee,” Freya said to Amber as she made her way back. “Or one of Ryan’s dubious energy drinks…”

AN: Btw, that energy drink is not made up. It’s called M-150 and the bottle design is just the best.

Also, I’m going to be writing one of these every day for the next twelve days, so put prompts in the comments if you want me to write something specific.