Basically, the first Freya Snow book is a little out of whack with the rest of the series. It’s not bad. The writing style is just inconsistent. The main reason for that is that HUNT represented a return to original fiction after a long time writing fanfics. So, I was determined that my writing style not seem fanfic-y.

Of course, that’s absurd. It’s clearly absurd because I’ve slipped back into my usual writing style in the following books and peoples’ opinions of the series have only gotten better. I hurt myself by trying to be “better” than my fanfic. Which is doubly ridiculous, because I mostly got the confidence to return to original fiction by my fanfic fans telling me that I should!

So, I’m rewriting the first book to be more in-line with the rest of the series. Nothing about the plot of the book will change. The world-building won’t change, but there are a couple of things I’m bringing forward for the audience (not Freya) from books two and three, just for clarity. If you’ve already read the rest of the series, you won’t have any reason to go back and read the new version.

(If you want to, of course, you’ll just need to re-download it from whichever site you bought it from when I upload the new version. For purists, I’ll have the old version for download indefinitely on this site.)

For now, I’m uploading the chapters as I write them to Wattpad and my Tumblr. I’m looking for as much feedback as possible, to tell me if it’s actually better than the original version.

(Obviously, the original version was beta read and edited, and this one won’t be until it’s finished, so there may be minor typos, etc.)

I’ll also be redoing the covers for the series once the new version of HUNT is released properly. So I thought I would let you guys in on the process of creating the new cover for HUNT, as well as revealing it.

(I’m not promising that I won’t wake up tomorrow and tweak it a little, but this is the finished version for now.) 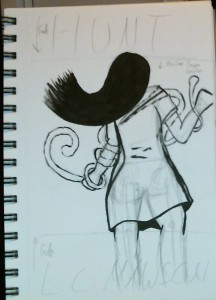 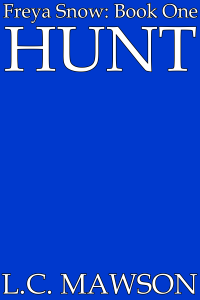 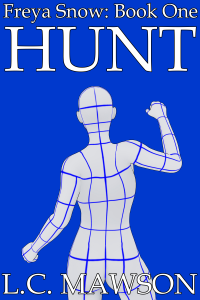 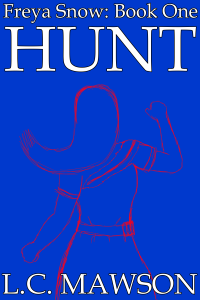 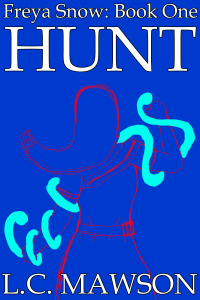 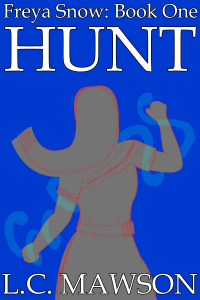 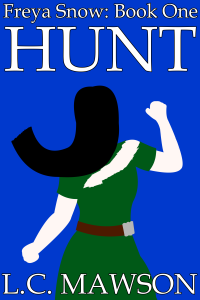 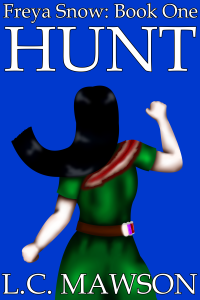 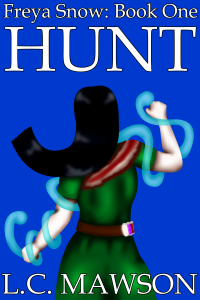 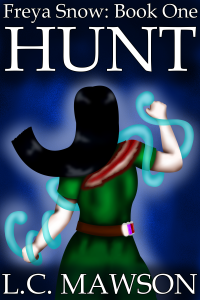 Step 1: While on holiday, I logged onto Amazon and looked up the most popular books in YA urban fantasy, noting down the key elements. As you might expect, it was back to the camera, with a dark background, and enough were illustrated that I decided to go that route. So, I sketched a quick mock-up, deciding to focus on Freya’s magic and the combat in the books, not wanting it to be mistaken for a Twilight look-alike (a very real trouble with writing a YA urban fantasy).

Step 2: Once back home, I logged onto my computer and first set up the typography. This is just my personal preference so that I know the scale of the drawing going in.

Step 3: I use Clip Studio Paint (formerly Manga Studio) for all of my artwork. It’s ridiculously cheap compared to Adobe products and it has a few cool features, like pose-able 3D models for reference. I moved this model into position, mimicking the sketch cover as best I could, while also doing my best not to have the eye drawn to Freya’s butt (which I realised became a real problem in my sketches for later books where I had her in jeans – I now know why all of the models on those covers are wearing long dresses).

Step 4: I sketched around the model, adding clothing and hair as I went.

Step 5: I added a quick reference for the water, making sure that nothing was in the way of anything else.

Step 6: I filled in the sketch with a base colour.

Step 7: I added basic, flat colour to Freya and got rid of the outline.

Step 8: I added shading, highlights, and detail to Freya. There are three ways in which I broke canon here. This is supposed to be her in the final fight of the book, wearing the Witches’ combat outfit that Evelyn gave her. 1) Her hair is supposed to be in a plait, but this looked cooler. 2) The parts of the belt for storing vials is empty when Freya goes into battle. But this looked cooler. 3) She actually sustained the would on her back in the earlier fight, and I exaggerated it to make it more obvious on the cover. I decided to have her have this wound in this outfit just to make it look cooler. The exaggerated wound wouldn’t be a problem, but that wound would have cut through her bra, which it doesn’t do in the book, because holy hell, can you imagine having to fight without a bra?! Freya is not a flat-chested girl. But, again, most people will see this cover in thumbnail form on online storefronts like Amazon, so exaggerating makes sense. Basically, I broke from canon for the sake of cool. Which, as a former fanfic writer, I am perfectly fine with.

Step 9: I properly added the water.

Step 10: I finished off the background, making it darker and making Freya glow. Which is a thing that Angels do, though I’m not sure that that’s in the books yet. It will definitely be, but I can’t remember when it first comes up. Sometime before Book 6…

Okay, well, I hope you liked that little look behind the scenes. If you want to see the rest of the new covers as I finish them, you should sign up to my newsletter because that’s how I’ll be releasing them first.