So, I'm tired and stressed, but I'm still making an effort to keep up with my drawing. As always, I know it's crap and this is more about improving while holding myself accountable to you guys.

Anyway, I decided I wanted to draw happy girlfriends, which means characters from a series that's not coming until next year (because no spoilers for Freya Snow). So, I decided to draw Claire and Hate from the Aspects series.

Technically, I have the first Aspects book written and ready to go, but I don't want to be known as only a YA author, so it's on hold until after Lady Ruth and The Almosts are out, and the Phoenix Saga is well under way.

But, since it's written, I thought I would share a scene. Technically, my drawing isn't of any specific scene because I got their dates mixed up with another talk over coffee that Claire has with a different character, but this is close enough:

Claire tried not to think about the fact that Lindsay wasn’t speaking to her as she concentrated on her striking drills. Lindsay was still struggling with what had happened a few days before and Claire knew that her presence was just a reminder. It still hurt, though.

“I think that’s enough for today,” her instructor said to them, and Claire was less than thankful for the reprieve. In truth, the monsters had rattled her as well.

She turned, only to see Hate standing in the doorway as everyone left. Her mask was noticeably absent and Claire wondered if the masks allowed them to move around the city freely while not fighting. She’d never really thought about what the Aspects did in their free time, besides give occasional interviews to trashy magazines. (Not that Claire read such things… At least, not much…)

Hate was wearing tight black jeans, with the same boots as last time, and a red tank top with a black leather jacket over it. Claire could feel heat rising to her face as she tucked a few loose strands of hair behind her ear.

“Hey,” she greeted, trying not to be shy.

Her eyes darted a little. “You probably shouldn’t be calling me that in public.”

“Then what should I call you?”

That stopped her dead in her tracks. “Oh, um… Huh. You know, I’ve never had to give a name before.”

“Well, what was your name before you became an Aspect?”

Hate’s gaze dropped a little. “We’re not really supposed to use our old names anymore…”

“Well, I have to call you something,” Claire figured.

“I guess just stick with Hate and… I don’t know… Try to keep it quiet?”

Claire nodded. “So, are you just here to check on me?”

“I… Well, kind of,” Hate admitted with a sheepish smile. “I was actually… I was wondering if you liked coffee.”

Claire frowned, a little confused by the question. “Just in general or…?”

“With me, specifically. I mean, I was wondering if you wanted to go. With me. For coffee.”

“Give me five minutes to shower?” Claire asked, cursing a little as the words left her mouth. She knew she was going to need more than five minutes. Her fine motor skills meant that she took a little longer than most to get clothes on and off. She hoped that there was still some of that dry shower left in the can in her locker.

Claire hurried to the locker room, thankful to find a half-full can of dry shower. She sprayed herself vigorously before throwing her light grey zipper hoodie over her sports bra.

“Ready to go?” Hate asked as she arrived.

“Yeah,” Claire told her as they headed out of the community centre.

“So, you’re deadly with a make-shift spear and you spend your after-school hours practising Baguazhang? And here I thought my combat skills were impressive.”

Claire shrugged, folding her arms with embarrassment. “I’m pretty sure that throwing that ice pole was a fluke.”

“Then what’s the story behind the Baguazhang?”

“Don’t I get a question now?” Claire asked, in an effort to change the subject as they walked through the park, towards the high street.

“Technically, I’ve only asked the one, but okay.”

“What combat skills do you have?”

“All of the Aspects learn Krav Maga to help us in battle.”

Claire frowned. “And that actually helps against monsters?”

Hate sighed. “All you’ve seen is the Dragon. The Aspects learnt their lesson after the Death Flora.”

“Yeah. It’s got this flower thing on top which gives off mind-control spores. Rena and Half-Bloods are immune but Humans go feral and start attacking everything. But usually we then specialise in a weapon as well for dealing with the rest of the monsters. I like my unggeom. My hate manifests as this sort of electricity, though I guess you saw that last week, and I can channel it through the blade.”

“But you didn’t have it last week?”

She sighed. “I didn’t think I’d need it. So close to Love’s death… my hatred for the monsters should have been at an all-time high…”

Hate shrugged. “It’s fine. So, my turn with a question. Isn’t St. Cecilia’s an arts academy?”

Hate raised an eyebrow and Claire couldn’t help but smile.

“A bad-ass ballerina? I can’t say that I expected that.”

Claire shrugged. “So, what do you do for fun? Or do you just brood?”

Hate let out a bark of laughter. “I swear, I don’t brood that much. Just enough to keep my power level up.”

“Yeah. I am the literal embodiment of Hate, so my power works better when I hate stuff.”

She shrugged. “When I was younger, I used myself as a target a lot. Then Empathy practically pleaded with me to stop a couple of years ago. Now I just fixate on small annoyances. Currently, I hate the local burger place for not selling mozzarella sticks all of the time.”

“That I can definitely get behind,” Claire told her. “But then, I’ve been told that I’m a cynical person, so I guess hating things just comes naturally.”

Hate grinned at that, though it faded after a moment and she looked a little sheepish. “In all honestly… I’m not even supposed to be here. We’re supposed to avoid our opposite emotion and, well, for me that means not going on anything resembling a…”

“A date?” Claire asked, realising where she was going.

“I wasn’t going to use the word,” Hate said, sheepishly. “I was trying to be all cool and casual.”

Claire couldn’t help but grin. “Says the girl who is breaking all of the rules to be here with me.”

“Says the girl who tracked me down without so much as a name to go by.”

“You’re not helping!” Hate protested with a groan.

Claire grin widened as she twirled in front of Hate and gave her just the barest of pecks, barely brushing her lips.

Hate’s face was going a dark pink as Claire pulled away.

“I was really hoping that we would meet again,” Claire told her, more than a little surprised by her own confidence, though the way her heart seemed to be tugging itself out her chest to get to the girl in front of her might have contributed.

“I… We should definitely do that again,” Hate told her. “And again. And again.”

“Coffee first,” Claire told her, moving back to her side. “I haven’t slept all week.”

“You having nightmares from the fight?” Hate asked and Claire couldn’t help but be touched by the concern in her voice.

“No, actually. My friend isn’t doing so well, though, and I’m worried about her. The stress is causing insomnia.”

Claire shrugged. “I’m used to it. I can’t sleep if they so much as change the lunch menu to food I don’t like. Just one of the annoying side effects of being Autistic.”

She waited with slightly baited breath. Some people reacted negatively to the A-word. Some people just pitied her or told her “Oh! My ex-boyfriend had a brother with autism!” before spewing out a bunch of misinformation, some of which was quite hurtful.

“Tell me about it,” Hate gushed. “I have this really annoying habit of going into hyperfocus in the evening. No sleep for me.”

Hate joined in with the gesture, sporting a grin of her own as they entered the coffee shop. Claire had been letting Hate steer her and was glad that she had picked her favourite place.

“So, what do you do for fun?” Claire asked as they waited in line. “You didn’t say before.”

“Oh, I’m pretty good with oil pastels,” she replied, ducking her head a little sheepishly. “That’s usually what sends me into hyperfocus.”

“So, what do you do outside of classes?”

Claire shrugged. “I mostly watch TV and mess about online.”

“Oh yeah? What shows do you watch?”

“Is that why you were at the ice rink?”

“No, that was just a school trip. A reward for not getting detention all year.”

Hate snorted. “I’m pretty sure if I had to go to school, I would be in detention all of the time.”

“I’ll admit, there were a couple of close calls.”

Hate smirked as she reached the front of the queue. “Hazelnut latte with whipped cream, please,” she said before turning to Claire. “What do you want?”

Claire shrugged. “I’ll put milk in it to cool it down first.”

Claire reached into her pocket to bring out her card, but Hate waved her hand away.

“The best thing about fighting monsters without choice is that the government covers your expenses.”

Claire frowned but nodded, putting her card back. “Fine, but I’ll get the next one.”

“Okay. I assume you must not be hurting for cash if you go to St. Cecilia’s.”

Claire’s gaze dropped to the floor as she shrugged. “I… Yeah. I get an allowance until I’m eighteen.”

Claire was glad for the distraction of their coffees arriving She followed Hate to go and sit in the corner booth, more than happy to sit with their knees just barely touching as they got to know each other.

Another day, another drawing. Only this time I scanned the pencil drawing, as well as the pen outline. I also then coloured it with copic markers and digitally.

This time it’s a drawing of the Mel vs. the dragon scene from WHITE, the second Freya Snow book. 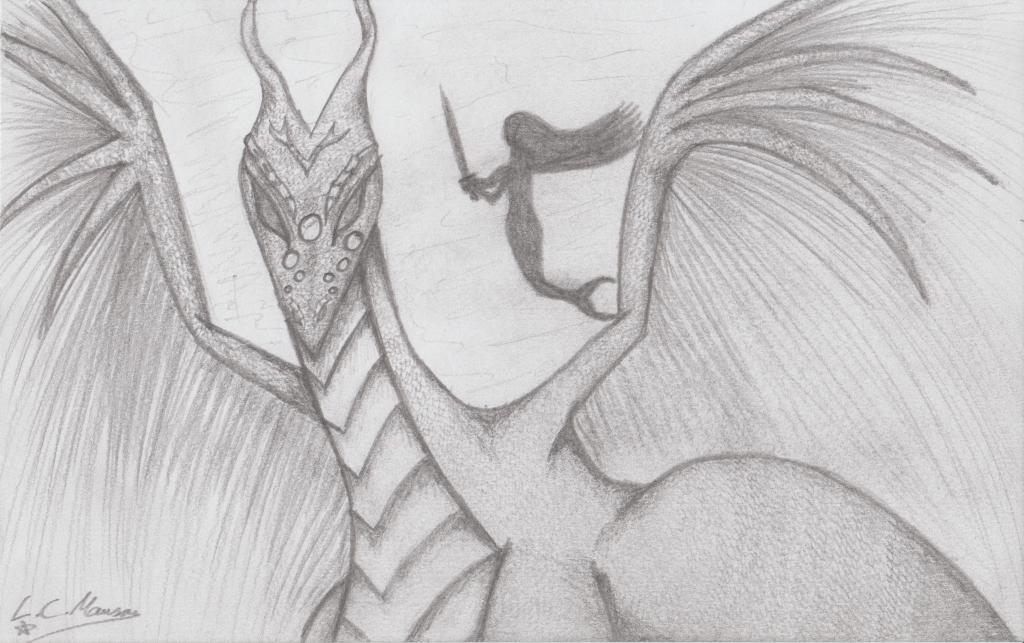 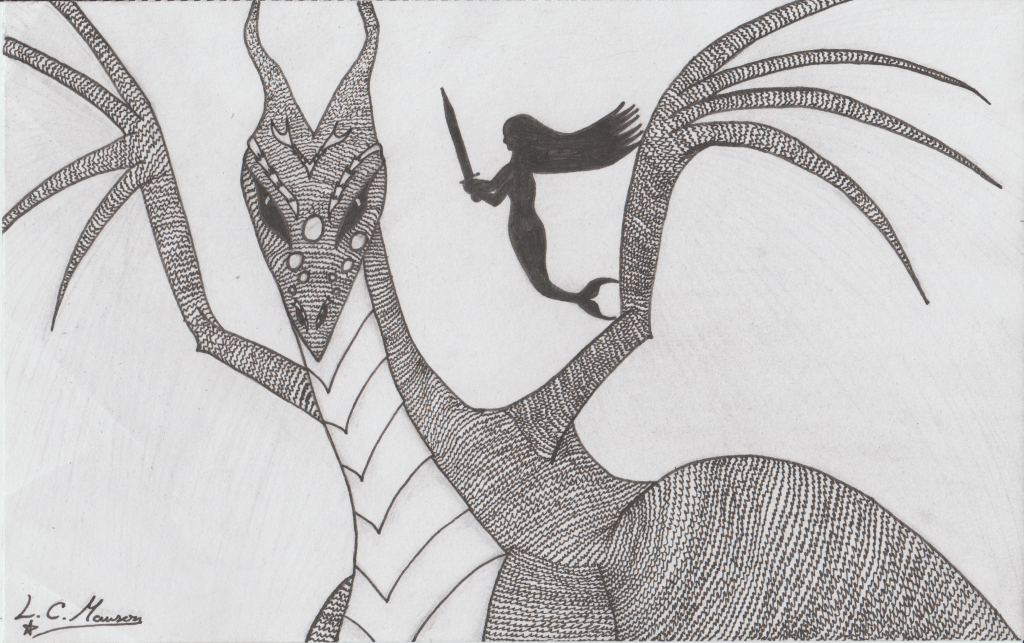 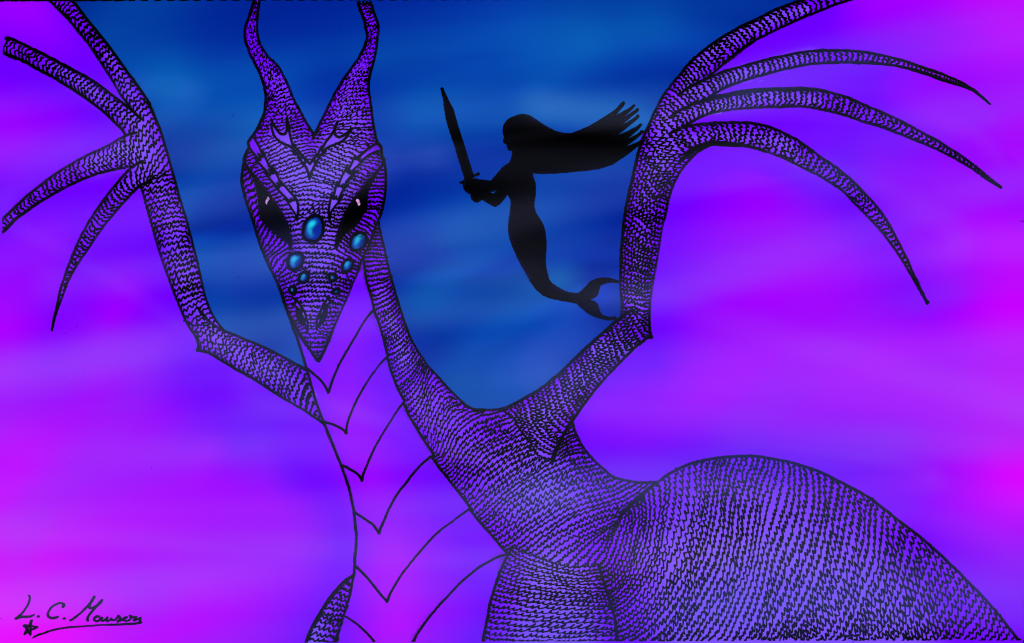